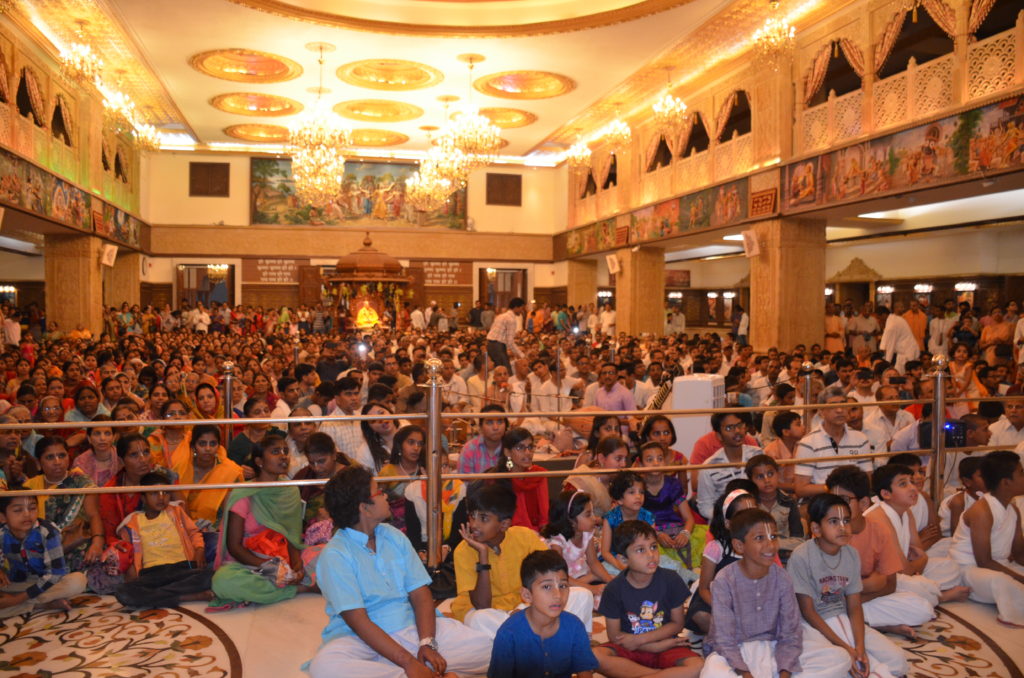 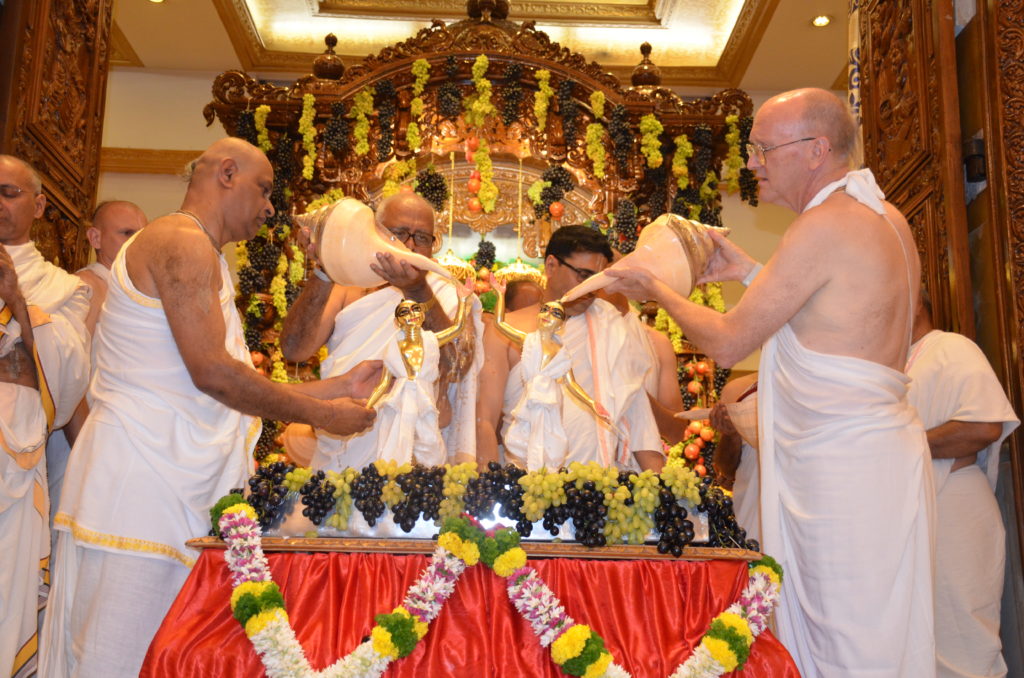 His birth site is commemorated by a temple named Garbhasva and is visited by throngs of pilgrims today.His father, Hadai Ojha and mother Padmavati, were pious Brahmans originally from Mithila. Nityananda Prabhu was born on the auspicious thirteenth day of the bright fortnight of the month of Maghi. As a child, Nitai (as Nityananda Prabhu was called), loved to enact the pastimes of Sri Krishna or Lord Rama. He did this so authoritatively and with such rapture, that the entire village would be immersed in the love of Godhead. Nitai’s favorite part was that of Lakshman, and He enacted it with so many apparently authentic scenes not described in the Ramayana, that people would wonder if He was making it up or actually relishing His own pastimes. The village of Ekachakra was completely absorbed in the love of little Nitai, where He spend the first 12 years of his earthly life. In the 13th year, a travelling sannyasi, said to be the famous Lakshmipati Tirtha, enchanted by Nitai’s devotion and service, requested Nitai from his parents, as a travelling companion.

His parents, bound by Vedic culture, could not refuse the request of a guest and reluctantly parted with Nitai. However, devastated by the separation with Nitai, that Hadai Pandit soon gave up his life. Nitai traveled with Lakshmipati Tirtha for about 20 years, during which He visited all the holy places in the country, reminiscent of the manner that Balarama traveled while the battle at Kurukshetra raged on. Nitai is said to be later on initiated by Lakshmipati Tirtha. He also associated with another of Lakshmipati Tirtha’s famous disciple, Madhavendra Puri, who although his godbrother, was revered by Nitai was as a spiritual master. Madhavendra Puri is famous for establishing the sweet truth of Madhurya-rasa which later become an integral part of Gaudiya Vaishnavism. Among the other disciples of Madhavendra Puri is Advaita Acharya, and Isavara Puri (the spiritual master of Chaitanya Mahaprabhu).Nityananda Prabhu met Chaitanya Mahaprabhu in 1506, when He was 32 years old and the Lord 20 years. 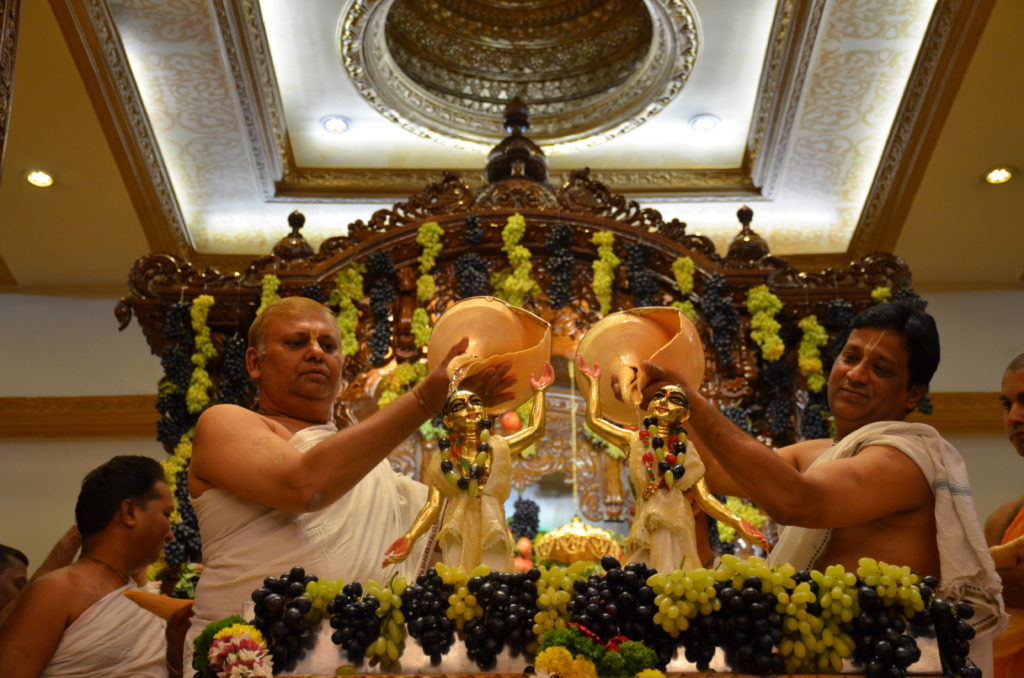 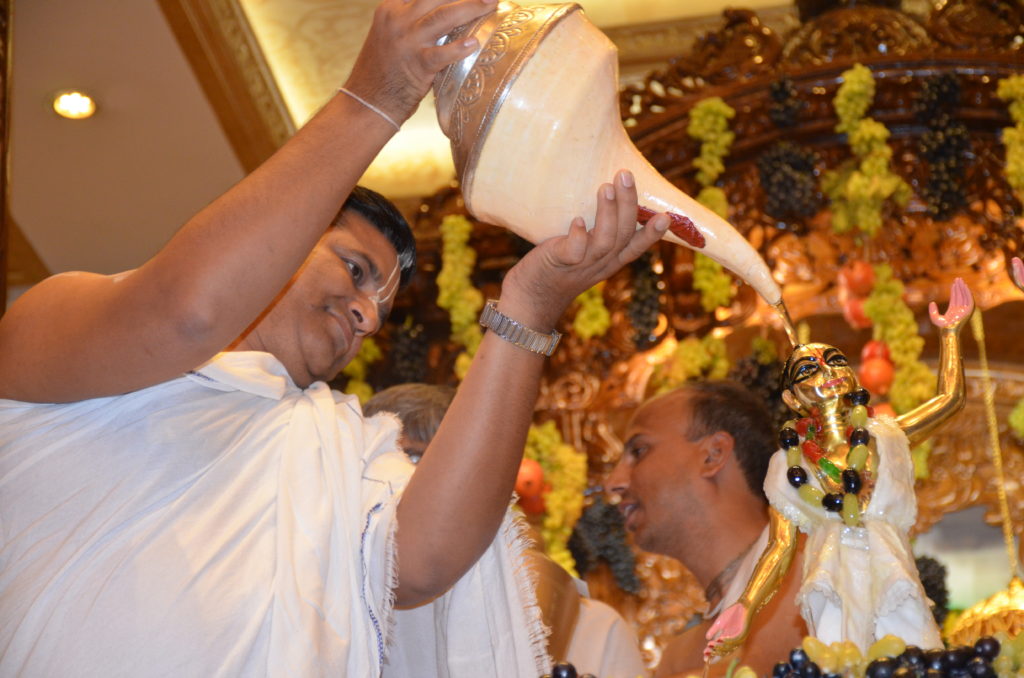 It is said that when Nityananda Prabhu reached the land of Nadia, He hid in the house of Nandan Acharya, to heighten the ecstasy of meeting through separation. Chaitanya Mahaprabhu aware of the arrival of His eternal associate dispatched Haidas Thakur and Srivas Pandit to search out Nitai, but they failed. Finally unable to bear the separation any longer, Chaitanya Mahaprabhu Himself went directly to Nityananda Prabhu and the ecstasy of the meeting was so transcendental that every one witnessing it were awed by the sublime experience. A temple called Sri Gaura-Nityananda commemorates this meeting place in Nadia. Nityananda Prabhu in His role as the original spiritual master was instrumental in spreading the Yuga dharma of Sankirtan all over the Gaudian desh (Bengal, Orrisa). His mercy knew no bounds, and people fortunate to come in contact with Him were inundated with the love of Godhead.

It was by His mercy that Raghunatha Dasa, one of the six Goswamis started the famous Danda Mahotsava festival of Panihatti, a tradition that continues to this day, and was thus able to serve Chaitanya Mahaprabhu. He extended His mercy to even fallen souls like Jagai and Madhai, delivering them from the sinful lives and protecting them from the wrath of even Chaitanya Mahaprabhu. Indeed His mercy knew no bounds, and fortunate were the people who tasted the nectar of His instructions. When Nityananda Prabhu returned to Bengal at the request of Chaitanya Mahaprabhu, His decided to abandon His avadhuta status and become a grahastha (householder). He married Jahnavadevi and Vasudha, the two daughters of Suryadasa Sarakhel, who the brother of Gauridasa Pandit (an intimate associate of Chaitanya Mahaprabhu and the spiritual master of the famous Shyamananda Pandit). Nityananda Prabhu had a son (Virchandara) and a daughter (Gangadevi) from Vasudha. Soon after Vasudha passed away and Jahnavadevi looked after the children. 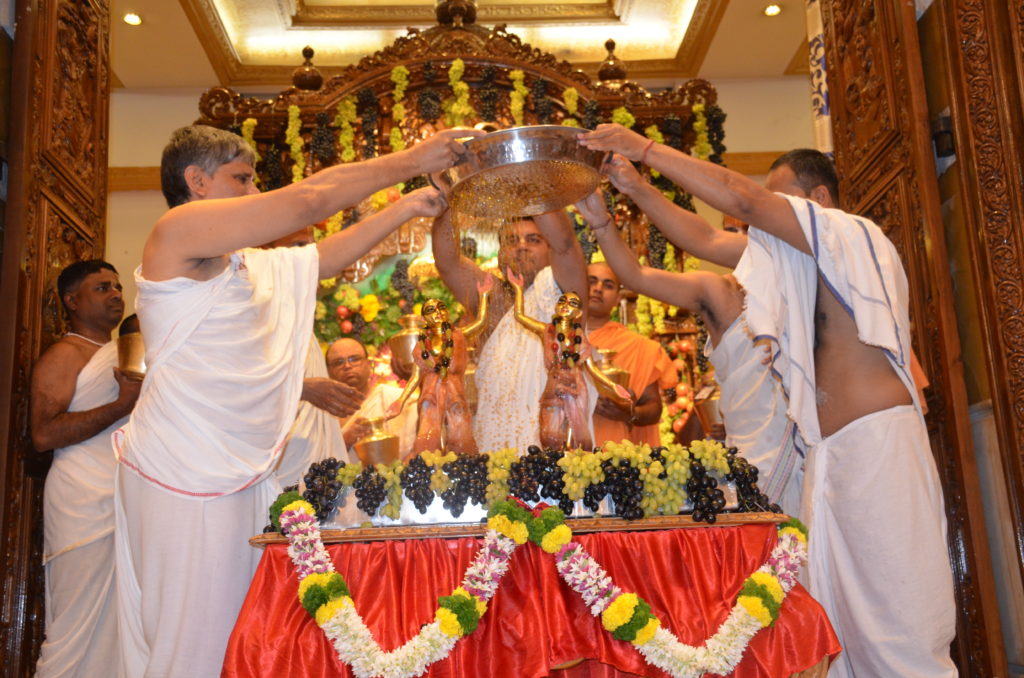 She later initiated Virchandra, and also became an instructing spiritual master to the likes of Shyamananda Pandit, Shrivasa Pandit and Narottama dasa Thakur. Jahnavadevi is revered as a Vaishnavi and she established the pre-eminent position of women in the Vaishanava tradition. Lord Nityananda wound up His earthly pastimes, by merging into the deity of Krishna, known as Bankim Ray, not far from Ekachakra. Vaishanava Acharyas emphatically state that people who try to understand Chaitanya Mahaprabhu without getting the mercy of Nityananda Prabhu will never succeed and one must pray very sincerely to Lord Nityananda Prabhu as the adi-guru (original spiritual master) to be delivered to the Lotus feet of Sri Chaitanya Mahaprabhu. The presence of Nityananada Prabhu is always felt in the presence of one’s own guru, for the guru is considered to be the living manifestation of Nityananda Prabhu’s love and mercy, and his shakti (power) is what gives the disciple the ability to perform devotional service and experience spiritual bliss